We’re searching the songbooks of John and Charles Wesley for suitable hymns to sing before and after our class meeting. Wesley’s 1780 Collection of Hymns, intended for the United Societies, is usually most favored for it’s organization around the Christian walk to Glory. However, we oftentimes resort to older material. The several editions and publications of Hymns and Sacred Poems (HSP) are a less finished form, perhaps representing the development of the Wesleyite religious societies as they departed from reliance upon regular ministry? Consequently, there’s an ambiguity about the hymn selections, namely, a mixture between those that are purely ‘experiential’ compared to those wholly liturgical in spirit. Of course, the latter stand closer to the Church calendar, thereby, having a stronger public rather than private quality. As I perused these many editions, I stumbled upon a curious discrepancy in the 1747 version of HSP.

According to Duke University’s archive of Wesleyite hymnody (a very useful historical resource), the 1747 edition was compiled and improved by John’s brother, Charles W, for the purpose of better establishing the methodist religious Societies in Ireland. What stands out with the 1747 edition is the opening hymn, intimating Psalm 122. No Wesleyan songbook, particularly in the HSP series, begins with this Psalm. Most frequently appearing is Eupolis’ ‘Hymn to the Creator’ or the ‘fortieth chapter of Isaiah’, but the 122nd Psalm is unique to Mr. Charles Wesley’s compilation. The former hymn, found in xxx, celebrates the attribute of God’s extensive and infinite Goodness. The latter song is the expansion and conquest of Jehovah’s Kingdom by the evangelical commission of the Gospel.

The paraphrase of Psalm 122 is has a very different tone, evidently pointing to public duties (i.e, the parish or established church) rather than the business of the religious Societies. It begins with an invitation to brethren, presumably the methodist people themselves, 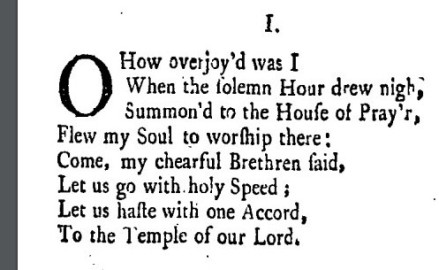 At this point it might be worth noting the term “Temple” is curious given Wesley’s distinction between pastors and preachers (see ‘The Ministerial Office’, Sermon #115). The former pertained to the regular parish clergy whom Wesley considered like Levites, administering the Temple ordinances of the Established church. Whereas, extraordinary ministers were the evangelists or prophets who did not give ‘sacrifice’ yet were messengers of God, so the methodist lay-preachers were called.

Hence, it seems Charles is summoning the methodist to the Established church, at least where the sacraments are rendered and offered. The next stanza adds the “kind Command” of scripture to give due worship to the Lord, and  evidently (if my reading is correct) the national Church is styled a Jerusalem, suggesting the proper Altar of Jehovah God. Jerusalem, not Samaria or a divided altar.

The third stanza may refer to the visible or earthly church, concluding such largely by what follows (the fourth stanza below) where Charles says, “God has built his Church below”. The harmony of parts is thus proclaimed, and these are likely gifts– whether such belong to regular clerical or extraordinary ministers. So, it follows the “chosen Tribes go up to testify their Gospel hope”– sounding much like the methodist people themselves repairing to their parish churches (as the third-part of the General Rule advises).

The fourth stanza is most striking, seeming to contextualize the entire poem. It reads, 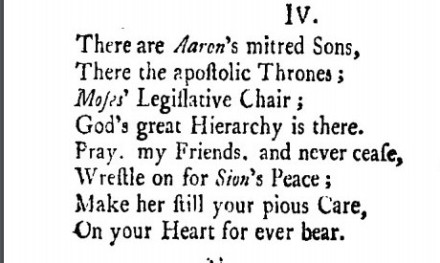 The first-half of the stanza seems to speak about a temporal, ecclesiastical body– most likely the Church of England. If so, then indeed the same is “Sion”, helping us understand the earlier stanzas. Should we be surprised Charles gives us a very ‘high’ view of the Established Church.

Indeed, the fourth stanza is very similar to his brother John’s apology for lay-preachers. For example, John explains, in Sermon 115, “In ancient times the office of Priest and that of Preacher were entirely distinct”– a distinction usually had between the first-born and the youngest. Wesley notices, while escaping the bondage of Egypt, Aaron was never prophecised, yet Moses was the greatest prophet. “Meanwhile not many  of the Levites were prophets. And if they were, it was a mere accidental thing”. And, upon the Gospel Dispensation, the division between priest and prophet apparently continues, with a further difference among prophets of the extraordinary type. First, the distinction between ordinary and extraordinary Preachers:

6. But we have reason to believe there were, in every age, two sorts of Prophets. The extraordinary, such as Nathan, Isaiah, Jeremiah, and many others, on whom the Holy Ghost came in an extraordinary manner. Such was Amos in particular, who saith of himself: “I was no Prophet, neither a Prophet’s son; but I was an herdman: And the Lord saith unto me, Go, prophesy unto my people Israel.” The ordinary were those who were educated in ‘the schools of the Prophets,’ one of which was at Ramah, over which Samuel presided. These were trained up to instruct the people, and were the ordinary preachers in their synagogues. In the New Testament they are usually termed scribes, or nomikoi, ‘expounders of the law’. But few, if any of them, were Priests. These were all along a different order.

Wesley then notes the difference between priest and evangelist:

7. Many learned men have shown at large that our Lord himself, and all his Apostles, built the Christian Church as nearly as possible on the plan of the Jewish. So, the great High-Priest of our profession sent apostles and evangelists to proclaim glad tidings to all the world, and then Pastors, Preachers, and Teachers, to build up in the faith the congregations that should be found. But I do not find that ever the office of an Evangelist was the same as that of a Pastor, frequently called a Bishop. He presided over the flock, and administered the sacraments. The former assisted him, and preached the Word, either in one or more congregations. I cannot prove from any part of the New Testament, or from any author of the three first centuries, that the office of an evangelist gave any man a right to act as Pastor or Bishop. I believe these offices were considered quite distinct from each other till the time of Constantine.“

Recall, Wesley’s eventual Presbyterian equation of bishops with pastors, justifying his own making of priests for Scotland and America, etc..  Nonetheless, these distinctions allowed the methodists to build religious societies while keeping them away from the parish clergy’s administrations. Examined from another angle, Wesley’s scheme was arguably ‘high church’, distancing the preaching office, and its duties, from the regular clerical.

According to recent biographer Gareth Lloyd, Charles Wesley was jealous for the Church, regularly bearing pressure upon his brother to reign in ambitious lay-preachers. Indeed, Psalm 122’s provence owes to their father, the Rev. Samuel Wesley, Sr., rector at Epworth. Both Samuel and his wife, Susanna, had strong royalist sentiments, even non-juroring sympathies. Furthermore, the Psalm’s curious placement as the opening song giving prominence to loyalism with Establishment. Such positioning in the 1747 may have aimed to embolden Ireland’s Protestant minority, surrounded by Roman Catholics. It may also have been a salvo to brother John with his growing conference of English lay-preachers and their irregularities? Interestingly enough, the bulk of Irish methodists would remain keen to the ‘Old Plan’, e.g.– abstaining from sacraments and services at church hours– out-lasting their English counterparts unto the 1816 Conference. 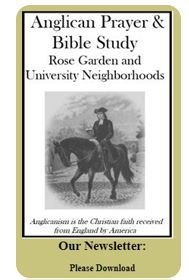